Today’s women who lead are: 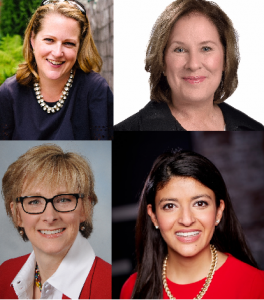 As eBay Canada’s managing director, Andrea Stairs leads the Canadian strategy and operations of one of the world’s largest online marketplaces and Canada’s second largest e-commerce business. In this role, Andrea is responsible for cultivating eBay’s community of Canadian users – from individual consumers to established brands and retailers — and for overseeing all of eBay’s Canadian functions, including product management, marketing, business development, and public and government relations.

Andrea was most recently head of marketing for eBay Canada, managing the brand’s marketing strategy and execution. She was also instrumental in launching eBay’s French-Canadian website and in leading the eBay Motors team in Canada.

After receiving a BA from McGill University, Andrea obtained LLB and MBA degrees from the University of Toronto.

Andrea sits on executive committee of the board of directors of the Information Technology Association of Canada (ITAC).

A native of Montreal, Andrea now lives in Toronto with her husband and young son and daughter.

Ilse Treurnicht is the CEO of MaRS Discovery District, a leading innovation centre located in Toronto. She oversees both the development and operations of the MaRS Centre and its broad suite of entrepreneurship and innovation programs.

Ilse joined MaRS in early 2005 from her role as President & CEO of Primaxis Technology Ventures, a startup-stage venture capital fund focused on the advanced technologies sector. Prior to Primaxis, she was an entrepreneur with senior management roles in a number of emerging technology companies. Ilse is an active member of Canada’s innovation community. She served as Chair of the Canadian Task Force on Social Finance in 2010, and is a member of the Science, Technology and Innovation Council (STIC).

Ilse holds a DPhil in chemistry from Oxford University, which she attended as a Rhodes scholar.

Shelley joined Nestlé Canada in March 1990 working on the PetCare Business in Marketing and in 1997, was promoted to Vice President of Confectionery. In 2000, she became the Leader of PetCare, and for 2001/2002, led the Canadian acquisition and transition to Nestlé Purina. She became the Head of Nescafé and Beverages in 2002 and was promoted to President, Ice Cream in July 2008. In March 2012, Shelley became the Division Executive Manager of the Frozen Foods Business. Prior to joining Nestlé Canada, Shelley worked at General Mills, maker of cereals, pasta and sauce, for five years.

Shelley actively participates in industry initiatives and is currently the Vice Chair on the Board of Directors for Food and Consumer Products Canada (FCPC). She serves on the Board of the Grocery Innovation Foundation which has raised over $75 million to provide a better life for challenged children, and to answer many other community needs. She also sits on the Boards of the Golden Pencil Award Executive Committee and the Canadian Stewardship Services Alliance (CSSA).

Shelley resides in Toronto with her two daughters, and apart from spending time with her family, enjoys boating at her nearby cottage. Born and raised in rural Ontario, north of Toronto, Shelley graduated from the Business Program at Wilfrid Laurier.

Amber Kanwar is an Anchor and Reporter at Business News Network.

She is a leader in breaking news; reporting on upcoming deals and IPOs slated to hit the market, activist interest in one of Canada’s biggest pipeline companies and one of the most plugged in reporters on the turnaround effort at BlackBerry.

She specializes in equity markets and is constantly digging for stocks flying under the radar, trends that are about to emerge, and curating research to make it accessible to viewers. Prior to joining BNN, Amber completed her Master of Journalism degree at Ryerson University. Her Master’s thesis was an investigative story into the fertility industry that broke a national scandal and appeared on the front page of The Globe and Mail.

When Amber is not poring over analyst reports, you can find her at Monk’s Café enjoying the big salad or duck hunting in West Monroe, Louisiana.

See the webcast below: