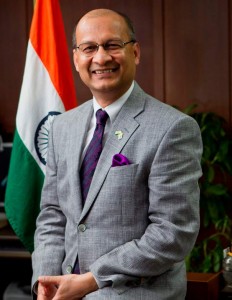 Vishnu Prakash, High Commissioner of India to Canada Speaking to the Empire Club of Canada about “What’s next for the world’s fastest growing large economy?”

Watch the video below:

Mr. Prakash joined the Indian Foreign Service in 1981. After postings in Moscow and New Delhi he was assigned to New York where he handled Economic and Commercial matters.
In 1992 he was appointed Consul General of India in Vladivostok. Within a span of two years a dozen Indian companies set up offices in the Russian Far Eastern region and direct trade links were established.

He was Director in the Ministry of External Affairs, (MEA) looking after Nepal and Bhutan between 1994 and 1997 during which period he also did a three-month sabbatical with the Asia Pacific Center for Security Studies in Hawaii (USA).

Mr. Prakash was next assigned as Counsellor (Political) first in Tokyo (1997-2000) and then in Islamabad (2001). In 2002 he was posted as Minister (Economic and Commercial) in Cairo. He actively promoted Indian investments in Egypt.

He assumed office of the Consul General of India, Shanghai in January 06 and served there till August 08, when he was appointed as Joint Secretary (XP) and Official Spokesperson of MEA in New Delhi. He demitted office in January 2012.

He moved to Seoul as the Ambassador of India on 12 January 2012.

On 22 August 2013, he was conferred an Honorary Doctoral Degree in Business Administration by the Tongmyong University in Busan. On 22 January 2015 he was bestowed the ‘Ambassador of the Year, 2014′ award by the Asia Society, Korea Center in Seoul.

Mr. Prakash assumed the office of High Commissioner of India in Ottawa on 8 March 2015.

High Commissioner Prakash is married with two children. His wife Mrs. Neelam Prakash has a Master’s degree in Economics. She is a keen practitioner of Yoga and loves golf. His son Abhimanyu Prakash (32) is with a financial company in New York and his daughter Katya Prakash (28) is a doctor in San Diego, California