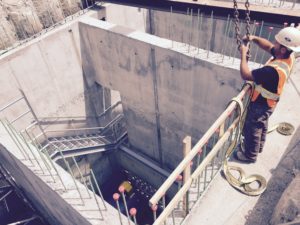 Toronto Hydro has completed a major milestone in the construction of the Clare R. Copeland Transformer Station, located in downtown Toronto. Following a complicated excavation project resembling a mining operation, a hidden tunnel connecting the new station to Hydro One equipment has been recently completed.

Invisible from street level, the hidden tunnel runs underground from Bremner Boulevard and Rees Street to Front and Simcoe Streets. When construction is complete, electricity will flow through large cables in the tunnel to supply the station, while pedestrians walk above the streets, oblivious of the power below their feet.

Copeland Station represents an important piece of Toronto’s infrastructure and a smart investment in the grid. Once finished, it will provide additional power to the downtown core – which is growing at an unprecedented rate – as well as help improve reliability and protection against power outages.

Construction on Copeland Station is ongoing and is expected to be completed in 2016.  This innovative project is only the second underground station to be built in Canada and has been uniquely designed to preserve public green space beside the Roundhouse, a historical building.