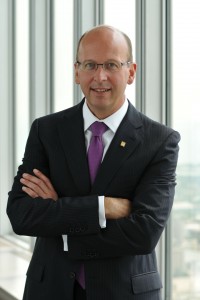 Victor G. Dodig, President and Chief Executive Officer, CIBC speaks about the future of banking to the Empire Club of Canada

Victor Dodig is President and Chief Executive Officer of the CIBC group of companies, one of North America’s largest financial services institutions. Mr. Dodig joined CIBC in 2005 as Executive Vice-President, CIBC Wealth Management. In 2007, he became Executive Vice-President, Retail Distribution, CIBC, where he led the bank’s retail banking distribution and sales teams. He was appointed Group Head, Wealth Management in 2011, taking on responsibility for the bank’s brokerage, private wealth, and asset management businesses in both Canada and the US. Mr. Dodig was named President and Chief Executive Officer and a member of CIBC’s Board of Directors in September 2014. He also serves on the Board of Directors for the C.D. Howe Institute and is a member of the Catalyst Canada Advisory Board. Prior to joining CIBC, Mr. Dodig was Managing Director and Chief Executive Officer in Canada for UBS Global Asset Management. Earlier in his career, he spent five years as Managing Director in Canada, the US and the UK for Merrill Lynch and Company, where he gained international experience, following three years as a Management Consultant with McKinsey and Company. Mr. Dodig is a past recipient of Canada’s Top 40 Under 40™ award. He holds an MBA from Harvard University where he was a Baker Scholar, and a Bachelor of Commerce from the University of Toronto (St. Michael’s College). He also holds a Diploma from the Institut d’études politiques in Paris.