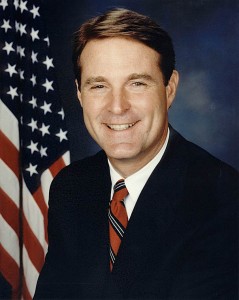 Senator Bayh will discuss the important role Nuclear Power plays in the Great Lakes Region as a key source of reliable, affordable electricity, while growing the economy and keeping the air we breathe clean.

Biography: Senator Evan Bayh is a former two-term governor of Indiana and U.S. senator and currently serves as a strategic advisor for McGuireWoods and the Leadership of Nuclear Matters, which is a group dedicated to inform the public about the clear benefits that nuclear energy provides.

Sen. Bayh had a very distinguished career in public service being elected overwhelmingly as Governor and Senator in his home state of Indiana. As a moderate Democrat, he was a leader, working in a bipartisan manner to seek consensus on several key issues, including financial services reform and healthcare. He was also a leading voice advocating fiscal restraint on government spending. Sen. Bayh served on several committees, including Armed Services; Banking, Housing and Urban Affairs; Energy and Natural Resources; Small Business and Entrepreneurship; Aging; and Senate Intelligence.

Prior to being elected to the Senate, he was elected to two terms as governor of Indiana, where he enacted welfare reform, cut taxes, and brought about fiscal discipline to the state’s budget. He also served as Secretary of State in Indiana (1986-1989).

Sen. Bayh also currently serves as a senior advisor at Apollo Global Management in New York and on the board of directors for Fifth Third Bank, Marathon Petroleum Corporation, Berry Plastics Corporation, RLJ Lodging Trust, and McGraw Hill Education. He also serves on the advisory board for the Central Intelligence Agency (CIA).