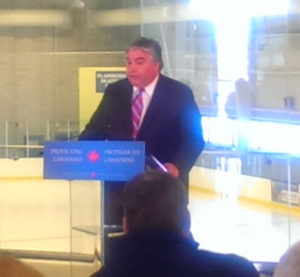 Hon. Peter Van Loan, Leader of the Government in the House of Commons

Today, on behalf of the Honourable Rona Ambrose, Minister of Health, the Honourable Peter Van Loan, Leader of the Government in the House of Commons, was joined by Member of Parliament for Ancaster-Dundas-Flamborough-Westdale, David Sweet, and Tom McAllister, CEO of Ontario Heart and Stroke Foundation, at the Harry Howell Arena to highlight Automated External Defibrillators (AEDs) installed at that facility.

These AEDs were installed as part of the National AED Initiative, a partnership between the Public Health Agency of Canada and the Heart and Stroke Foundation to have AEDs in recreational hockey arenas across the country.

To date, over 1,600 AEDs have been put in place in recreational arenas in Canada through the National Initiative, and over 12,000 people have been trained on how to use them properly. This includes two AEDs installed at the Harry Howell Arena and over 20 people trained from that facility. The goal is to have 2,000 of these life-saving devices installed in recreational hockey arenas across the country by the end of the program in March 2016, and that goal is already 80% met.

Having an AED accessible for all users in arenas and recreational facilities where moderate to high physical activity takes place can mean the difference between life and death in the event of a cardiac arrest. In fact, three lives have already been saved using AEDs installed as part of this Initiative.

Any recreational arena in Canada can apply for an AED through the National AED Initiative by visiting the HSF website. Once all arenas are equipped, funding may be available for AEDs to be installed in other high-traffic non-arena-based recreational facilities.