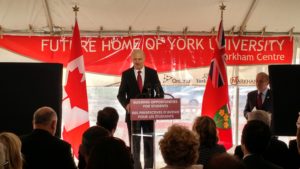 Ontario is helping more students pursue a post-secondary education, developing the talent and skills of our people and growing the province’s economy by supporting a new York University – Markham Centre campus in partnership with Seneca College.

The new York University – Markham Centre campus will serve an estimated 4,000 students in York Region, with the potential for more students over time. As a university/college partnership, the campus will offer a broad range of programs that incorporate experiential learning with an academic focus on business, arts and social sciences. It will also be close to local transit options and other facilities such as sports fields, the YMCA and the Atos Markham Pan Am / Parapan Am Centre.

In March 2014, the province released a competitive call for proposals to post-secondary institutions for new projects that would serve areas of the province where future demand for undergraduate education will be strong and where gaps in access are expected. The joint proposal from York University in partnership with Seneca College for a Markham campus was selected following a transparent and competitive process by an evaluation panel.