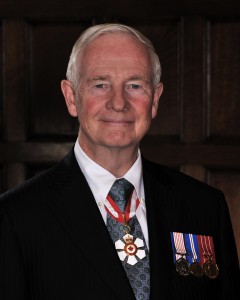 His Excellency the Right Honourable David Johnston, C.C., C.M.M., C.O.M., C.D., Governor General and
Commander-in-Chief of Canada
Photo credit: Sgt Serge Gouin, Rideau Hall
© Her Majesty The Queen in Right of Canada represented by the Office of the Secretary to the Governor General (2010)

Live Webcast – Empire Club of Canada – His Excellency the Right Honourable David Johnston, Governor General of Canada – Towards 2017: What Are We Giving to Canada? – (approx.) 12:40 P.M. Friday June 19th

David Johnston began his professional career as an assistant professor in the Faculty of Law at Queen’s University in 1966, moving to the University of Toronto’s Faculty of Law in 1968. He became dean of the Faculty of Law at the University of Western Ontario in 1974. In 1979, he was named principal and vice-chancellor of McGill University, and, in July 1994, he returned to teaching as a full-time professor in the McGill Faculty of Law. In June 1999, he became the fifth president of the University of Waterloo. Mr. Johnston has served on many provincial and federal task forces and committees, and has also served on the boards of a number of public companies. He was president of the Association of Universities and Colleges of Canada and of the Conférence des recteurs et des principaux des universités du Québec. He was the founding chair of the National Round Table on the Environment and the Economy, and chaired the federal government’s Information Highway Advisory Council. His academic specializations include securities regulation, information technology, and corporate law. Mr. Johnston holds an LL.B. from Queen’s University (1966); an LL.B. from the University of Cambridge (1965); and an A.B. from Harvard University (1963). While at Harvard, he was twice selected for the All-American hockey team and was named to Harvard’s Athletic Hall of Fame. He was the first non-American to chair Harvard’s Board of Overseers. He is the author or co-author of 24 books and new editions, holds honorary doctorates from over 20 universities, and is a Companion of the Order of Canada. He was born in Sudbury, Ontario, and is married to Sharon Johnston. They have five daughters and 11 grandchildren. Sworn in on October 1, 2010, His Excellency the Right Honourable David Johnston is the 28th governor general since Confederation.