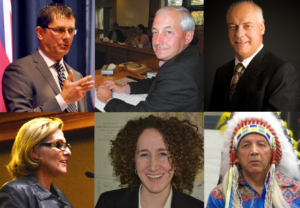 The Empire Club of Canada is pleased to host a rare and very special public event featuring business and political leaders from North Ontario as they discuss, debate, and offer solutions on the opportunities and challenges of investing in the North.
The panel will include:
Dave Canfield, President, Northern Ontario Municipal Association (NOMA), and Mayor of Kenora
Al Spacek, President, Federation of Northern Ontario Municipalities (FONOM), and Mayor of Kapuskasing
Lawrence Martin, Grand Chief, Mushkegowuk Council
Jamie Lim, President & CEO, Ontario Forest Industries Association (OFIA)
Joelle Faulkner, President AreaOne Farms
Gerald Panneton, Founder and Former President and Chief Executive Officer of Detour Gold Corporation
The future wealth of Ontario, and indeed much of Canada, will come from Northern Ontario. Power from rivers, minerals from the Ring of Fire, lumber from the Boreal Forest, and emerging tracks of new agriculture lands are on the near horizon. Yet today, much of Ontario’s northern heartland is in crisis. New power projects are mired in government bureaucracy. First Nations communities are struggling. And, there is friction between the critical need for new infrastructure and the influence of well-meaning environmental groups that has stalled or cancelled projects that threaten not only the future of the North, but the prosperity of Ontario. Yet, there is much to celebrate about Ontario’s north – including new investments in lumber and agriculture.