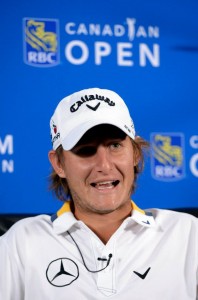 Emiliano Grillo leads the field at the 2015 RBC Canadian Open

Emiliano Grillo leads the field at the 2015 RBC Canadian Open at Glen Abbey Golf Club in Oakville, Ont., following the first round of play. The native of Argentina tallied eight birdies en-route to an 8-under 64 performance.

After receiving a foreign sponsor exemption into last week’s Barbasol Championship, Grillo made a birdie on the final hole to move into a T10 finish. With the top-10 standing, Grillo earned his way into the field of Canada’s National Open Championship. This marked his sixth start on the PGA TOUR with his best finish coming in March, when he lost on the first playoff hole to Alex Cejka at the Puerto Rico Open.

Like Grillo, Vaughn Taylor is playing at the 2015 RBC Canadian Open thanks to a T10 finish at the Barbasol Championship. The Augusta, Ga., native began his day by birdieing two of his first three holes; he then mirrored the feat by notching birdies on holes 16 and 18.

Taylor and fellow Georgian Brian Harman sit T2, one shot back of the lead. Harman, who calls Sea Island home, tallied eight birdies on the day and is hoping to claim his second career PGA TOUR victory to accompany his 2014 John Deere Classic title.

Florida natives Steve Wheatcroft and Erik Compton along with South African Tyrone Van Aswegen and Australian amateur Ryan Ruffels hold shares of fourth. Playing on a sponsor exemption, the 17-year-old Ruffels totaled five birdies and an eagle en route to a 6-under 66. The 2014 Australian Boys’ Amateur champion is making his first start on the PGA TOUR.

Brantford, Ont., native David Hearn – who narrowly missed out on his first-career PGA TOUR victory at the beginning of the month at the Greenbrier Classic – and Team Canada Young Pro Squad member Adam Svensson of Surrey, B.C., top the Canadian contingent after opening with rounds of 3-under 69.

Hearn reflected positively on the state of the course and remains confident heading into day two. “I feel like this is the best condition I’ve ever seen Glen Abbey in, and it’s nice to see it firm. I played a solid round of golf and that’s what I needed to do. So if I can hit a few more greens tomorrow, I like my chances.”

Tee times for the second round of the 2015 RBC Canadian Open are available here.

RBC CANADIAN OPEN FRIDAY IS RED AND WHITE DAY
Golf Canada is pleased to announce that Friday, July 24 at the 2015 RBC Canadian Open is Red and White Day. Everyone coming to Glen Abbey Golf Club in Oakville, Ont., for the championship’s second round – whether they be players, spectators or members of the media – is encouraged to wear red and white to demonstrate their Canadian pride and to support the 16 Canadian players in the field for Canada’s National Open Championship.